A Matter Of Degree 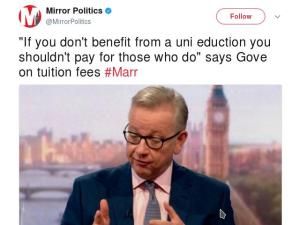 Whilst lists on Social Media of which Degrees should be funded may be useful to Michael Gove, trying to defend University Courses on the basis of utility is a slippery slope we’ve been sliding down since the 1980s 1.

I’m all for paying for GPs, Tax Avoidance Consultants, Artists and Architects who specify cheap cladding 2 to learn but those who have been customers of the Degree Factories often seem to be supporting wage differentials rather than Education.

The point either misunderstood or ignored amongst the trickle down arguments for subsidising University is the extent to which those who haven’t had the advantage of attending gain from supporting those who do and currently things are out of balance and without a reversal of increasing inequality they are going to get worse.

For every graduate research chemist there are fifty middle managers in that position because of a piece of paper rather than ability and even if a job is open to non degree holding candidates they will be paid considerably less.

No one could argue against funding Doctors to train because that is a rare absolute case of us all benefiting — whilst there is an NHS. Dentists? Unless you’re lucky you have to pay through the teeth.

As the State shrinks, contractors replace Councils, more and more things are privatised, house prices rise and wages increase faster for those already have the most we’re really not getting a good return on our investment.

Continuing with the popular GP example, (it’s never an executive imposing zero hours contracts for some reason), whilst a Surgery cannot exist without a Doctor, at any sort of scale neither can it exist without receptionists — they are interdependent. You might care to look at the wages of the latter as it’s an example of undoubted ‘benefit’ but also a rather measly one. ‘How much do you pay your cleaner?’ as I like to ask the more middle class Graduate.

As happened during the Brexit Referendum campaign telling people with little how well off they are rings rather hollow coming from those who quite often have rather enjoyable well paid jobs.

The move in recent decades to University becoming ‘Big School’ has seen billions wasted on those forced into it despite it not suiting them, not least for the lack of attention and funding for alternatives and the economic penalty of not going. Like the comedy ‘Gold Standard’ of A-Levels the combination of those who assume ‘it was good for me it must be good for everyone’ and those who fear Degrees losing their social status and financial advantage condemns us to a system that does not get the best out of everyone. All should have a chance to go University but they should also have the opportunity not to.

This is hopelessly simplistic but a grand thesis in comparison to the ‘four legs good two legs bad’ reaction to the questioning of this holy cow 3.

Guilty As Charged Photograph by Clarisse Meyer from unsplash.com