Everyone Is Entitled To An Opinion

But if you dis the Chronicles of Barsetshire you’ll get short shrift from me. 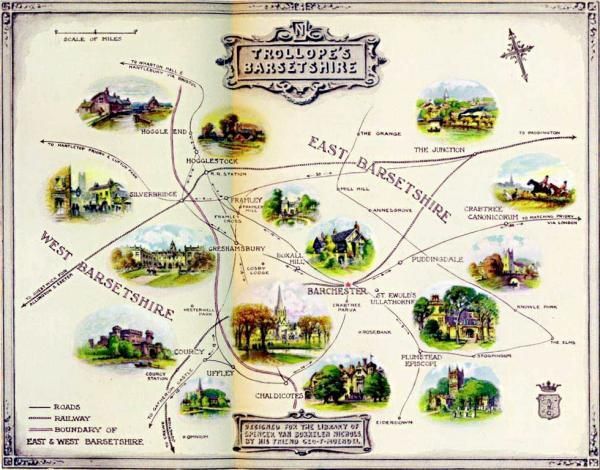 From “The Significance of Trollope” (1925) by Spencer Van Bokkelen Nichols, painted by George F. Muendel.

Of Framley Parsonage I need only further say, that as I wrote it I became more closely than ever acquainted with the new shire which I had added to the English counties. I had it all in my mind,—its roads and railroads, its towns and parishes, its members of Parliament, and the different hunts which rode over it. I knew all the great lords and their castles, the squires and their parks, the rectors and their churches. This was the fourth novel of which I had placed the scene in Barsetshire, and as I wrote it I made a map of the dear county. Throughout these stories there has been no name given to a fictitious site which does not represent to me a spot of which I know all the accessories, as though I had lived and wandered there.

Both the above from the USA Trollope Society

Stand Up For Your Country, Complain With Pride! The British have always talked the country down because we know we’re the best but felt it impolite to say so. But now there are a lot of people

Improved The Song For Me I discovered that Old Shep’s real name was Hoover and he died after a neighbour poisoned him. Whilst we’re on the subject of Red Foley next time