Great example by Tricot of the utility of Leo Fender’s designs. Try doing this with a Gibson - a 335 would be waterlogged in no time and a Les Paul would drag you straight to Davy Jones’ Locker.

(Ignoring the whole electricity and water thing of course).

Thankfully looking at the state of the water the overflow in question clearly isn’t what’s pumped out into the sea on some beaches.

It should be noted that if you fall into coastal waters in a country like the UK (or indeed a more northern Japanese prefecture) where its temperature is often below 15°C it’s important to float for a short period to get breathing under control before attempting to swim.

And you may want to consider the buoyancy of the woods you choose for the body and neck of your guitar.

Should you manage to clamber atop passing driftwood or such then the superiority of Fender type instruments is again demonstrated by their suitability for use as oars. An SG may seem ideal but the weak headstock joint could severely hinder your rowing in the event of breakage. 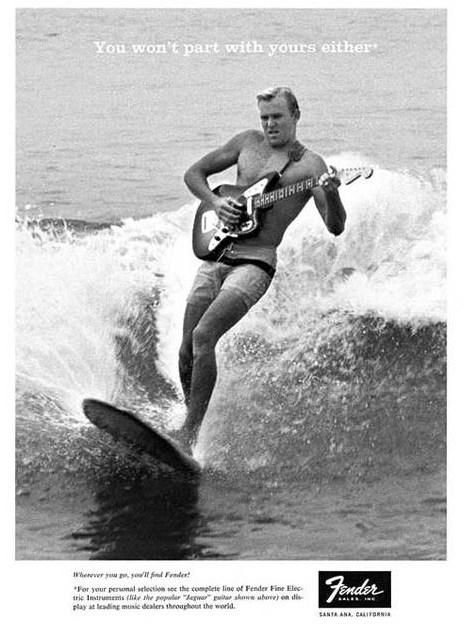 Masu Dore Round Up Nice to see the rarely appreciated Strat middle pickup to the fore. 23rd August It isn’t real rock ‘n’ roll without a glitter curtain. 8th August